The elephant in the eyelids is invisible, but the germs across the ocean are clearly visible. This old proverb is still relevant in this digital age, including in the branch of the art of music.

Many Malang musicians are less well known in their cities, but their names are popular outside Malang and even abroad.

MMI has a long record of the Malang musicians who work and express themselves abroad. They are Bambu Wukir, Tonny Prabowo, Nova Ruth, Begundal Lowokwaru, Antipathy, Wake Up Iris etc. But this time we talk about one of them first, Nova Ruth. Together with her husband, Gray Filastine, Nova has traveled the world spreading her works. Her albums are also regularly released adding to the diversity of the World Music collection. Each year there are about 50 to 100 performances they title across 5 continents. That’s the reputation of Nova, a resident of Klojen District who owns Cafe Legi Pahit at the corner of Jalan Pattimura-Surapati.

Nova and Filastine’s most recent work is Arka Kinari. This is a shipping project by boat which is named Arka Kinari. The 18-meter-long two-mast ship sailed along the sea while broadcasting musicals on the themes of the environmental crisis, maritime culture, and reconstructing the spice route.

They departed from Rotterdam in August 2019, passed a route by circling the Suez Canal, along the edge of the American continent, across the Pacific Ocean, and finally entered Indonesian waters in September 2020. Travel time, which should have been nine months, was delayed to a year due to the pandemic.

Currently Arka Kinari is anchored on the island of Bali waiting for the passage of Covid 19 before continuing his voyage to Surabaya and other countries. The picture of the Arka Kirani Ship that complements this article was taken by Filastine when the ship was in Cartagena, Colombia.

That was the communication between MMI and Nova Ruth on Sunday, March 28, 2021. Nova Ruth is a female musician from Malang City who continues to produce world-class creative music with her husband, Gray Filastine from Spain. (HHW). 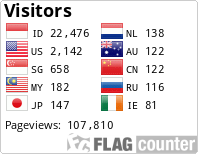